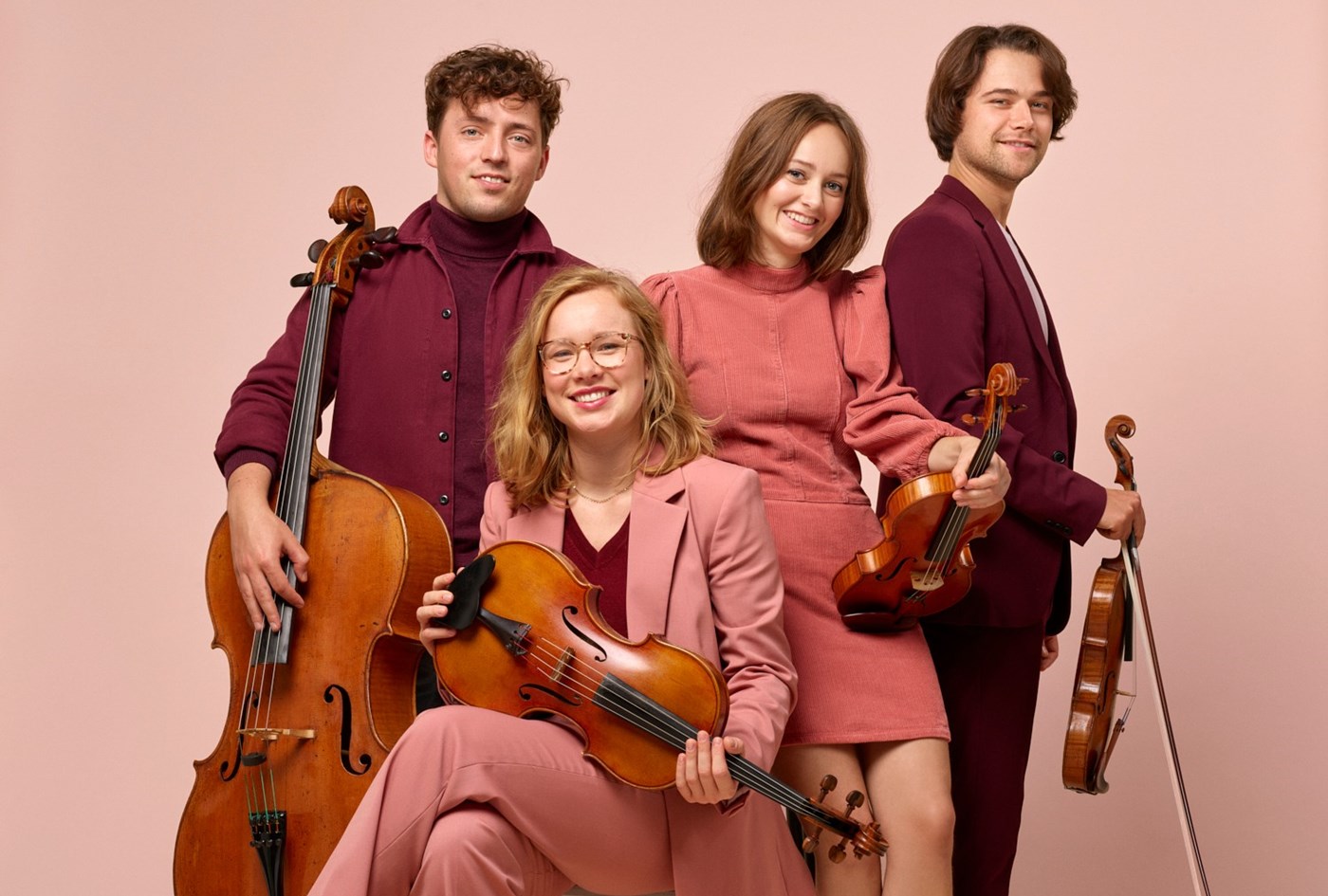 The Animato Quartet is widely considered to be one of the most promising young string quartets in the Netherlands with its members being praised for their passionate, spontaneous playing and their powerful on-stage presence. Founded in 2013, their programs contain a combination of classical music with inspiration from the abundant string quartet repertoire and contemporary compositions some of which have been especially composed for the ensemble.
Within the Netherlands the quartet has performed in the Kleine Zaal of Het Concertgebouw in Amsterdam, Tivoli-Vredenburg in Utrecht and Muziekgebouw aan ‘t IJ in Amsterdam during the 2020 String Quartet Biennale. They played at festivals such as the Utrecht and outside the Netherlands, in Portugal, Germany, Norway and France.

In 2014, not long after their inauguration, the Animato Quartet received an award for ‘Artistic Excellence’ at the Brazilian ‘Festival International de Inverno de Campos do Jordao’. In the same year, the quartet was laureate of the Grachtenfestival Competition (2014). Later, in 2017 the quartet received the prestigious string quartet grant from the Kersjes Foundation, one of the largest private culture funds in the Netherlands supporting young talent. Being ‘artist in residence’ as part of the post-grad program of the Dutch String Quartet Academy, the Animato feels hugely privileged to work with inspiring artists and coaches such as Marc Danel and Eberhard Feltz. Approximately four times per year, the Animato Quartet participates in sessions organized by the European Chamber Music Academy, where they receive intensive coaching from Hatto Beyerle and Johannes Meissl. Alongside these sessions, their development both as musicians and as a quartet has also greatly benefited from lessons by top musicians such as Anner Bylsma, Jan-Willem de Vriend, Alfred Brendel, Gerhard Schultz and Vera Beths.

In 2018 Animato Quartet has been selected for being part of the Le Dimore del Quartetto network.
The Animato has been chosen from more than 40 applications as one of the four laureates of the Dutch Classical Talent Award 2021/2022. In the coming period the musicians will be working with specialized coaches on their program, with which they will tour thirteen Dutch concert halls in the 2021-22 season. The jury about this string quartet: “Four top players with a vibrant energy, they will wrap you around from the first note! …This quartet is the great promise of Dutch string quartets.”

In the near future, the quartet is looking forward to many new challenges. These include exciting collaborations with musicians such as saxophonist Kika Sprangers, bassoonist Thomas Dulfer, and pianist Hanna Shybayeva, with whom they have recorded Beethoven’s Piano Concerto nr. 1 in a transcription for string quintet; which will be followed by recording Piano Concerto nr. 4. In 2021-22 the Animato Quartet will perform the Concerto for violin, piano and string quartet by Ernest Chausson, with Noé Inui and Vassilis Varvaresos.
The Animato Quartet feels grateful to play on beautiful instruments. Both Tim’s violin (made by B. Gabrielli-Florence, 1764) and the cello of Pieter (Joh. Th. Cuypers-The Hague, 1775-’80) are on loan from the Dutch Musical Instruments Foundation (NMF). Elisa Karen is playing a viola by Daniel Royé, purchased with the support of Stichting Eigen Muziekinstrument (SEM).