The Quatuor Diotima is one of the most in-demand chamber ensembles in the world today. It was formed in 1996 by graduates of the Paris National Conservatory.

The quartet’s name evokes a double musical significance: Diotima is at once an allegory of German romanticism – Friederich Hölderlin gives the name to the love of his life in his novel Hyperion- and a rallying cry for the music of our time, brandished by Luigi Nono in his composition Fragmente-Stille, an Diotima.

The Quatuor Diotima has worked in close collaboration with several of the greatest composers of the late twentieth century, notably Pierre Boulez (who revised his Livre pour Quatuor for them) and Helmut Lachenmann. The quartet regularly commissions new works from the most brilliant composers of our time, including Toshio Hosokawa, Miroslav Srnka, Alberto Posadas, Mauro Lanza, Gérard Pesson, Rebecca Saunders and Tristan Murail.

Reflected in the mirror of today’s music, the quartet projects a new light onto the masterpieces of the 19th and 20th centuries, especially Beethoven, Schubert, the Second Viennese School (Schoenberg, Berg and Webern), as well as Janáček, Debussy, Ravel and Bartók.

In the quartet’s rich discography one finds, notably, their interpretations of the Second Viennese School and the definitive version of the Livre pour Quatuor by Pierre Boulez (on Megadisc). Their recordings are regularly praised and awarded by the international musical press: French magazine Diapason’s Diapason d’Or (five awards including two Best of the Year), Classica (Best of the Year), Télérama, Grammophone (Editor’s Choice), The Strad, and many others.

The Quatuor Diotima has recorded exclusively for the Naïve label for ten years; in 2016 they launched their Diotima Collection for that label, devoted to the works of major composers of our time. The first releases in the collection, devoted to Miroslav Srnka and Alberto Posadas, are to be followed with musical portraits of Gérard Pesson, Enno Poppe and Stefano Gervasoni.

Since 2008 The Quatuor Diotima has had a privileged relationship with the Région Centre-Val de Loire, which hosts the quartet in residence. This relationship is also an important laboratory for artistic and pedagogical projects. The Quatuor Diotima has developed a series of quartet concerts in Orléans that brings together a new generation of quartets with established ensembles. At the l’Abbaye de Noirlac, the quartet hosts and teaches master-classes that bring together young composers and quartets from around the world. 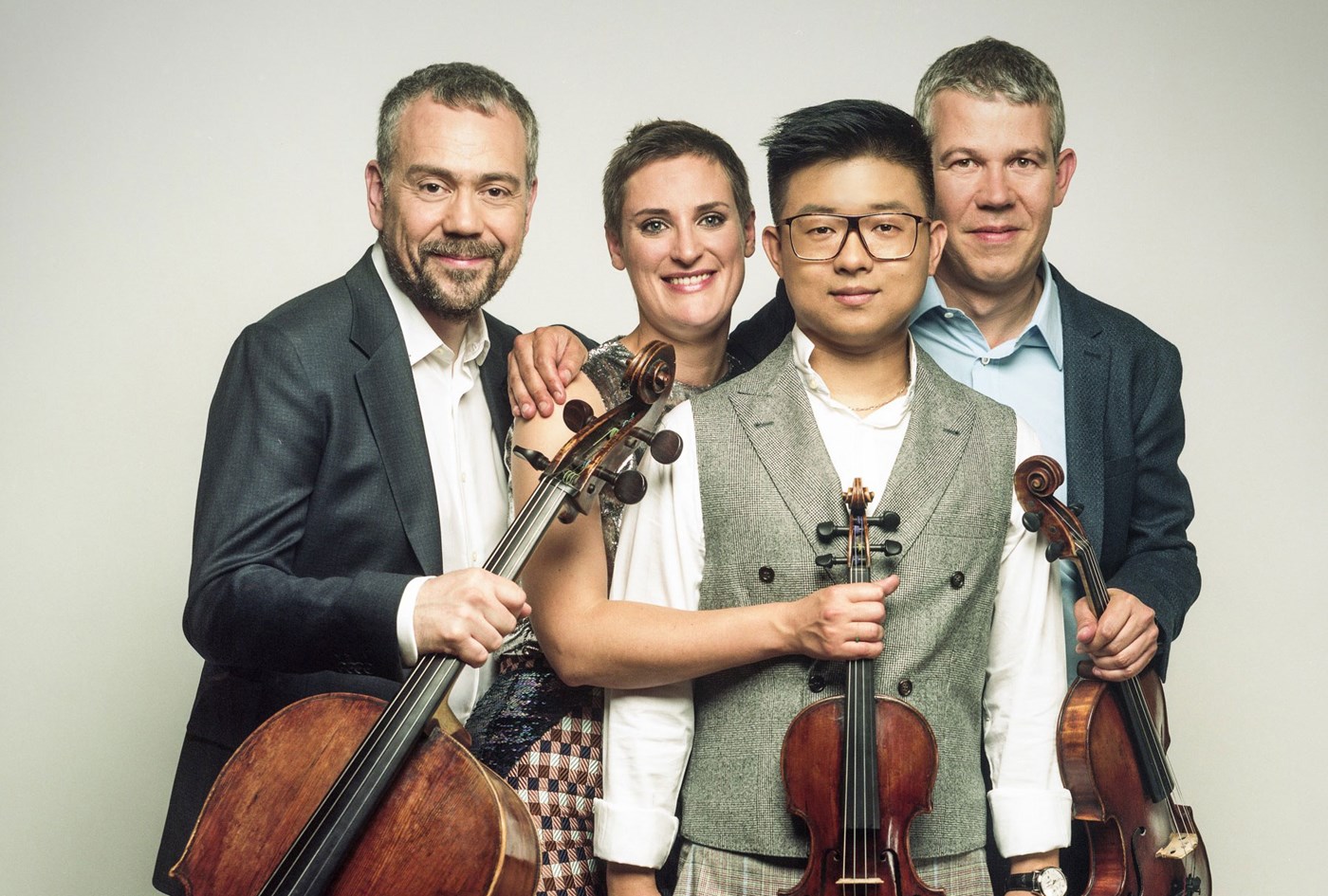 The Quatuor Diotima appears regularly in the world’s finest halls and concert series. They will perform this season in renowned chamber music series (Schubertiade in Schwarzenberg, Opéra de Montpellier, Printemps des Arts de Monte Carlo, Pierre-Boulez Saal in Berlin) as well as those devoted to premiers and contemporary music (Musica in Strasbourg, Présences in Paris, Ultrashall in Berlin). Alfred Brendel has invited the quartet to Prague to play Bartók’s complete quartet cycle, an exceptional project that they will also present on tour in Colombia, in China and in Taïwan. Their recording of the cycle will appear on Naïve in January, 2019.
New works to be premiered this season include those by Jean-Luc Hervé, Philippe Hurel, Silvan Eldar and Francesca Verunelli.

The Quatuor Diotima has also been invited by the University of York for a series of concerts, chamber music master classes, and to work with student composers. In early 2019 they will also renew their residence at the prestigious Wissenschaftskolleg (WiKo) of Berlin.

Autumn of 2018 marks the beginning for the quartet of a three-year residence as invited artists at Radio France in Paris. During the residence period they will perform their habitual repertoire, but will also work with guest musicians in chamber music and rare works for quartet and orchestra, as well as several commissioned works in partnership with other concert series and European radio services.

The Diotima Quartet is supported by the DRAC and the Région Centre-Val de Loire, and regularly receives assistance from the Institut Français, Spedidam, Musique Nouvelle en Li­berté, Fonds pour la Création musicale and from Adami, as well as from private sponsors.